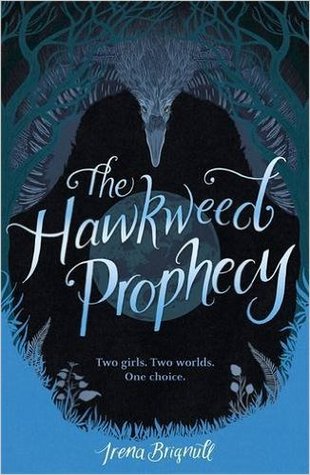 Synopsis: Poppy Hooper has managed to deceive her father into believing that there is nothing mysterious or unnatural about her. He ignores the cats that find her wherever she goes, the spiders that weave beautiful lacy patterns for her, even her eyes – one blue, one green with an extra black dot orbiting the pupil. Ember Hawkweed is a pitiful excuse for a witch. When the other girls in her coven brew vile potions, Ember makes soap and perfume. Fair and pretty, Ember is more like a chaff than a witch.

When the two girls meet, Poppy discovers her powers, and finds out the truth. Bound by their unlikely friendship and the boy they both love, the girls try and find their place in the world. But the time of the prophecy draws nearer – and the witches won’t give up the throne without a fight.

A book that will pull you in from the first page and won’t let you go until long after you finish the last page!

This book had such an interesting synopsis, I was really hoping it would live up to it, and it did so very well. The split POV’s between Ember and Poppy was written so well, it allowed you to see just how isolated the two girls were in their own worlds, and the contrast was so clever I loved it.

The essence of witchcraft was perfectly entwined within the story, as it was never too focused on it that it took away from the story of the relationship between Poppy and Ember, but it was there enough to make you fall in love with the magic and the way of life the witches have.

I was completely invested in the story from the start to the end, and the character development within the book was written brilliantly. I love how you can see how the two girls change to adapt more into the worlds where they belong, and how you can see slowly how their loyalties change.

The similarities between Poppy and Raven was also so well written that you can tell what has happened between them, but it is so subtle too. It’s such a wonderful attention to detail, I loved it.

The ending was absolutely incredible, and the scene with Raven and Poppy had me on the edge of my seat completely. I loved how developed Poppy had become, and how she showed everything she’d built up for throughout the book. I couldn’t have thought of a better ending.

I was completely blown away by this book, and I can’t wait to read the sequel because I have no doubt it will be just as good!

You can buy The Hawkweed Prophecy from Amazon UK here!